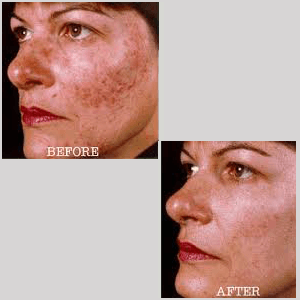 Rosacea is a quite common skin condition characterized by red and dry skin, especially on the nose, cheeks, chin, and forehead. It can affect anybody at any time but it mostly affects people aging 30 and above. Redness on the affected areas is a noticeable symptom of rosacea but some people also get small pimples and bumps on the skin. Burning and soreness in the eyes is also an associated symptom of rosacea.

The exact cause of rosacea is yet to be known. Affected areas show symptoms similar to those of a skin allergy, but it does not look like an infection caused by bacteria. It seems like something has irritated the skin, but what irritates the skin is still not known. Rosacea mostly affects people with fair skin or those who blush easily. A recent study has shown that rosacea runs in the family, if your father or mother had this condition, you are at a greater risk to suffer from it.

What are the symptoms of rosacea?

The most common symptom of rosacea, as stated above, is redness of skin on the affected areas. Symptoms of rosacea can be more precisely listed as:

What are common triggers of rosacea?

In the past it was believed that alcohol or alcohol containing drugs can cause rosacea, which is not true. Studies have shown that alcohol is not a cause; however, its consumption can worsen the condition. Other common triggers of rosacea include exercise, hot weather, sun exposure, hot baths, spicy foods and stress. In short, anything that causes the blood vessels in the face to expand is a trigger, be it a hot bath or steaming face. Fluctuations in weather can also cause flare-up of rosacea.

How is rosacea diagnosed?

There is no specific test for the diagnosis of rosacea. A doctor diagnosis it simply by looking at the red patches. The pattern of redness on your face makes it easy for a dermatologist to diagnose rosacea.

How is rosacea treated?

Besides being a painful condition, rosacea also doesn’t look good on the face. It makes people feel low on confidence at work as well as in social gatherings. If your rosacea is also bothering you, then take a deep breath and feel good. Those days are gone when rosacea was not treatable, today there are numerous treatment options available to help you get rid of this condition.

Mild to moderate redness and acne breakouts are treated with oral medications, such as low-dose antibiotics and anti-inflammatory drugs. Topical creams are also prescribed to help improve dryness and flaky skin. If oral medications fail to offer relief, lasers may be used for Rosacea Treatment. Intense Pulsed Light therapy or IPL therapy also comprises an effective treatment for rosacea.