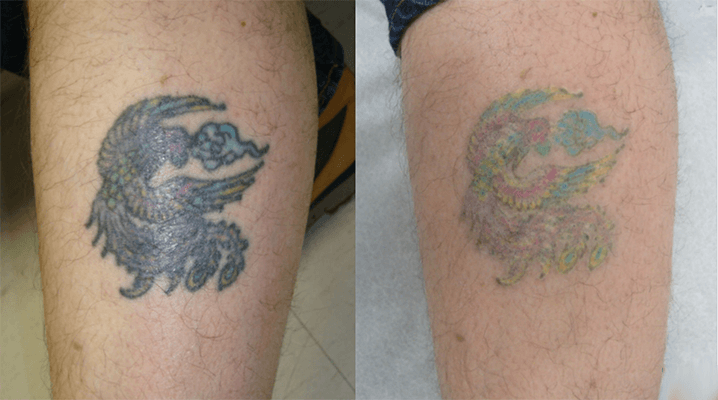 Lasers have proved to be the best and safest method when it comes to tattoo removal. When it comes to laser tattoo removal the laser targets the ink from the tattoo which is in the dermis layer of the skin. The laser then emits light energy which is absorbed by the ink particles which then shatters the ink into very tiny microscopic fragments. The fragments are eliminated from the body through the immune system.

You require the right technology in order for laser tattoo removal in Dubai to be safe and effective. There is a misconception that green ink tattoo is impossible to remove or hard and that could not be further from the truth. All you have to do is visit the right clinic which has up to date lasers. White ink tattoos are the only ones that cannot be treated because there is no color pigment for the laser to sense.

The ability for the ink to absorb the laser light energy determines how effective the laser will remove the pigment color. Lasers operate at different wavelengths so as to target specific ink colors. The ink either reflects or absorbs the laser’s light energy depending on the wavelength of the laser which is used and the ink color which is targeted. If the laser light is not absorbed by the ink then the wavelength used is ineffective hence the tattoo won’t be removed because the ink has not fragmented.

Types of lasers wavelengths that are used for removing tattoos

The ruby laser removes brighter shades of green, purple and blue and its wavelength is hardly visible red light.

This has a visible green light and it is effective on warm-toned colors as well as red ink.

This has a barely visible red light and works well on blue and green colors.

Before settling for a particular clinic do your research on it first because there are some clinics which say that they can remove certain tattoo ink colors while in reality they cannot. They may start the removal process but they won’t deliver deliver the optimal results.

Have you done a tattoo on your body years ago? Do you want to get another tattoo or simply remove the current tattoo? Whatever the...
Read More

Things to Consider Before Getting Laser Tattoo Removal

A tattoo can look amazing on your skin but what if you don’t want it anymore, or what if the job gets horribly bad. Well, laser ...
Read More

Tattoo Removal: Here’s What No One Tells You About the Process

The laser tattoo removal Dubai is the best option for the permanent tattoo removal. Here are the things you need to know if you ar...
Read More
Offers Contact Us